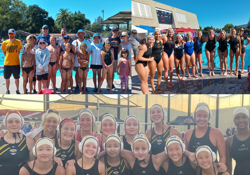 The week of July 21-24 played host to 2022 Junior Olympics (Session II) in San Jose, CA. Every year USA Water Polo hosts the Junior Olympics (JOs), a youth water polo tournament featuring the best age group teams from around the county competing for the title of national champion. Northwest Water Polo Club sent three teams to the Session II event including the clubs 18u girls, 16u girls and 10u coed team. Over the course of the four day tournament NWPC teams played hard, representing the program well against some of the top water polo teams from around the USA.

Northwest 18u girls got off to a rough start on Thursday with a with a 7-11 loss to Route 66. Game two saw the girls rebound with a 2-15 with against Seaside White which moved them into a play-in game Monday night. In the play-in the girls came up just short, 10-13 to move into Bronze bracket. Friday the girls returned to their winning ways putting up a 8.3-8.1 shootout victory over Southern while besting Diablo B 10-9. Saturday the girls came up short against Skip 5-7 before moving on to play against Modesto Stanislaus in the in the quarter finals. Against Modesto the 18s staged an epic come back, winning the game on a last second shot 9-8 to move on to the Bronze bracket semifinals Sunday morning. In the semis the squad fought hard but came up short 3-6, putting them in the third place game against Skip later that day. In the semi the girls played hard but once again came up short 8-10. Over the tournament the girls posted a 4-5 record enroute to a 4th place in the bronze bracket.

The 16u girls started off their JO tournament hot with a 9-2 win over Diablo. Game two was a bit different as the girls dropped a tough game to Foothill 1-19. In their third game of the day the girls came up against a tested Kearns squad and fell short 7-9 to move into the gold bracket. Friday the 16s lost games to Royal 559 (2-10) and Bainbridge Island (4-15) before besting American River 6-5. Saturday morning the girls dropped a rough 1-11 game to Third Coast Aquatics before moving to face off against San Jose Express. Against San Jose the girls came out slow and couldn’t quite catch back up to end the game 3-12. In their last game of the tournament the squad put forth a great effort against Cal Republic Black but came up short 3-7. For the event the 16s put together a 2-7 record and finished 11th place in the gold bracket.

NWPC 10u coed team put together a performance for the ages, starting off with a close 11-12 loss to Rose Bowl in game one. Game two the team couldn’t quite find the back of the net, dropping a 3-6 contest to San Diego Shores. Friday morning the 10s put fort a really good team effort against Santa Barbara 805 but came up short 7-9. Up next was ECA and while the 10s competed they ran out of gas to end the game 11-15. In the afternoon the team rebounded against ASA with a solid 10-2 win. Saturday the squad dropped a heartbreaking 9-10 game to Costa Del Sur before dropping another close to San Diego Shores 8-12. In their last game of JO’s the 10s put together an amazing team performance, earning 17-13 win over Lamorinda. Over the weekend the 10s had a 2-6 record which resulted in an 11th place finish in the 10u coed bracket.

Congratulations to all three Northwest teams on a great week of games at the 2022 Junior Olympics. Northwest will take a break for August and get back to training Sep 6 after Labor Day weekend.